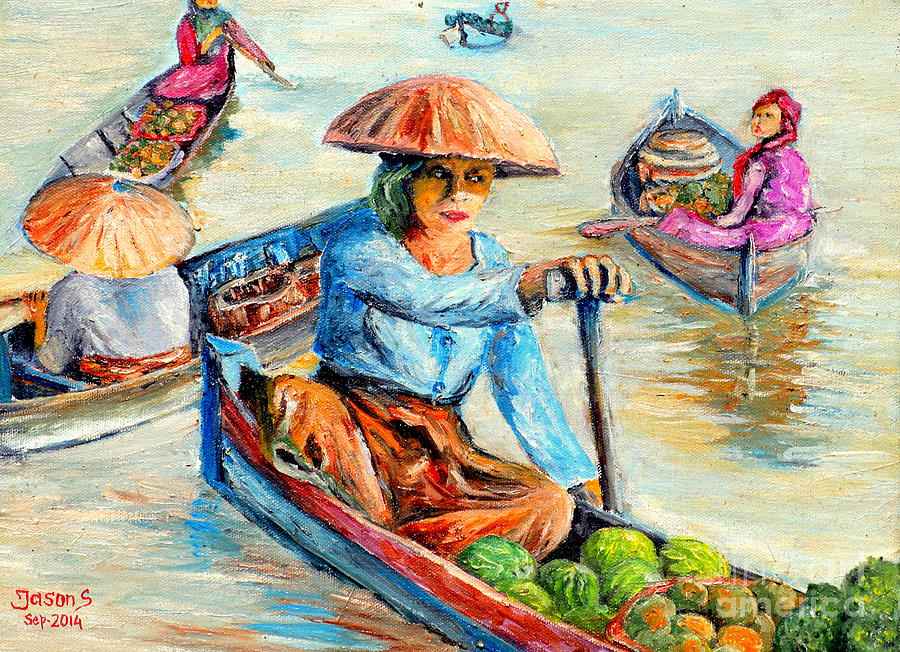 This original painting is currently for sale.   At the present time, originals are not offered for sale through the JASON SENTUF - Website secure checkout system.   Please contact the artist directly to inquire about purchasing this original.

Jukung is a small boat that is very useful to the local community of South Borneo. This kind of boat is used as a means of transportation and traditional trade as well as equipment for catching fish in the rivers, lakes, or marshes. South Borneo is known as a thousand rivers land. The geographical conditions of South Borneo were filled with rivers both large and small rivers. These rivers are very useful as important communication infrastructure and transportation by local people. These Women woke up so early and preparing their goods for sale. They look very busy, rowing their Jukung filled with fruits and vegetables along the Martapura river in South Kalimantan. No time for breakfast until they successfully sold their things. They look so hurry because the floating market would be crowded mostly two or three hours only. After all of their merchandise is sold, they had breakfast on the boat. There are many coffee shops and cakes on the boat back and forth along the river, offering snacks to satisfy your breakfast. Such a marvelous view captured your eyes when the sunrise and reflects its light along the surface of the river. Such a lovely morning tour in three hours with your folks. To reach this place, you have to get up so early, at 3.00 AM, and make a long trip from Banjarmasin, the capital city of South Borneo (South Kalimantan).

Thank you Kay for l/f this piece and voted it in the !ady's Hat contest.

Congratulations, your beautiful artistic work is Featured on the home page of the "Bedroom Art Gallery" group. 9/26/21 l/f/pin

Thanks Johanna for your comment on this work! You are so kind!

Thanks Stella for stopping by and comment.. I am glad you l/f this piece!

CONGRATULATIONS! Your amazing image was featured on the POSITIVE group Home page. Thank you very much for your great submission. Your Positive Administrator

Thanks Inessa for featured this piece on the "Positive" group Home Page! Happy Sunday!!

Thanks for stopping by and comment, Catalina... and thanks for your e-mail ... Just visited your website as well.. Happy Painting!

Thanks for visit and comment, Rusty ! very much appreciated..Happy Painting!

What a beautiful scene! Love the colors!

I am glad you love the colors of this painting, Michael..Thanks for visit and comment!

I love the colors and the sahdowing in the piece it show the light reflection of the water in it. Hard to paint but you nail it... Lovely. Thank you for sharing your talent.

At first it was very difficult to mix colors but now I could.. And now I am focus on how to mix warm and cool colors. I am really flattered by your compliment on this piece, Mechelle. Good Luck!

Thank so much, Ian for this piece has been selected to your "Awesome Asia Group' weekly page feature. Jason

Exquisite art work, i like her expression and movement.

Thanks Rachel for visited and comment.. you are so kind!

Thanks Phil for visit and comment..I am glad you l/f on this piece...

Thanks again Luliia... I am flattered by your comment..Good Luck!

Reminds me of my many stays in south east Asia love the floating market.

Thanks for visiting, Marvin!! I am glad this floating market painting remind you of Southeast Asia? Did you ever been in Indonesia?.

This is really really nice. I love the texture of the canvas coming through... and the overall composition is well balanced. I've enjoyed the look on the main character's face. :)

My heart is really overwhelmed with joy at the moment I read your comment on this piece. Thanks for visit, Holly! Happy Painting!

I am glad you love this traditional floating market painting... Thanks for visiting and comment!

Great piece. I love the expression of the lady at the center