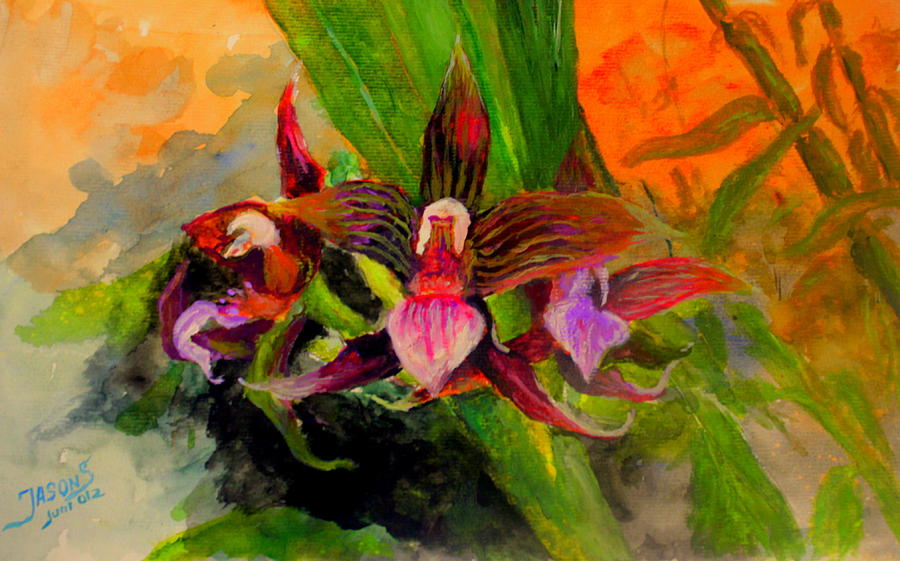 There are at least seven other new species of orchid, found in the tropical rainforests of Papua New Guinea and West Papua in recent years. The researchers made the discovery while surveying the previously unexplored forest
There are about 300 species of orchids, 8 of which have been confirmed as new to science, with 20 more still waiting for verification as new varieties. Even before the find, Papua New Guinea as well as West Papua claimed more known orchid species than any other country in the world.

Some researcher and botanist in a statement said "The island of New Guinea is an incredible gold mine of orchids,"
"There are over 3,000 known species found here with countless varieties undoubtedly yet to be discovered."I have captured some of them and ready to be painted on canvas or paper. Thanks for your visit and comment on this one.

Thank you Eva for your compliment on this piece! I am glad you f/v. good luck!

Thank you Gary for your visit and compliment on this piece! I am glad you voted it in the contest!

Congratulations, your beautiful artistic work is Featured on the home page of the "Bedroom Art Gallery" group. 9/28/20 l/f/pin

Your flowers are simply exquisite, Jason...today is a nod to fragile glimpses of beauty!...bravo!..LF

Love this one in particular !

Love the colors in this piece, makes me happy!

Thanks Judy for stopping by my gallery ...your compliment on this piece is really appreciated .. Good Luck!

Jason, your gallery is just magnificent and this painting is glorious! So happy to have found your group,'' FAA Gallery for All Painters!''

Thanks Hillman for your encouragement comment on this piece.. I am glad you have got my group! Happy Painting!

Very beautiful Painting. Love it and love your work . L/F

Hello Joyce..I am glad you love and favorite this work. Thanks for visit and comment, very much appreciated!

Love the surprising use of brightly contrasting colors next to each other.

Thanks Beverly for your compliment on this piece... much appreciated!

Amazing piece!! The sense of depth and the vibrant colors are fascinating. L

I am really flattered by your comment, Angeles..Thanks for visit...Happy Painting!

I always flattered and motivated by reading your comments on every pieces of my artworks. You are such a brilliant candid artist I am looking for so far. Your compliment on this one is really appreciated... Happy Painting!

Thanks Jian for stopping by and comment on this piece. Very much appreciated. Good Luck!

Thanks Catalina for your lovely comment.. I am glad you l/f, v

I am glad you l/f on this piece, Soos..Thanks for visit and comment!

Thanks Michael... I am glad you fav. and like this painting! Have a Sunday Blessing!

Thanks Dusan.. I am glad you like/fav. it! Happy Painting!

I am glad you like this piece, Anna! Thanks for feedback!