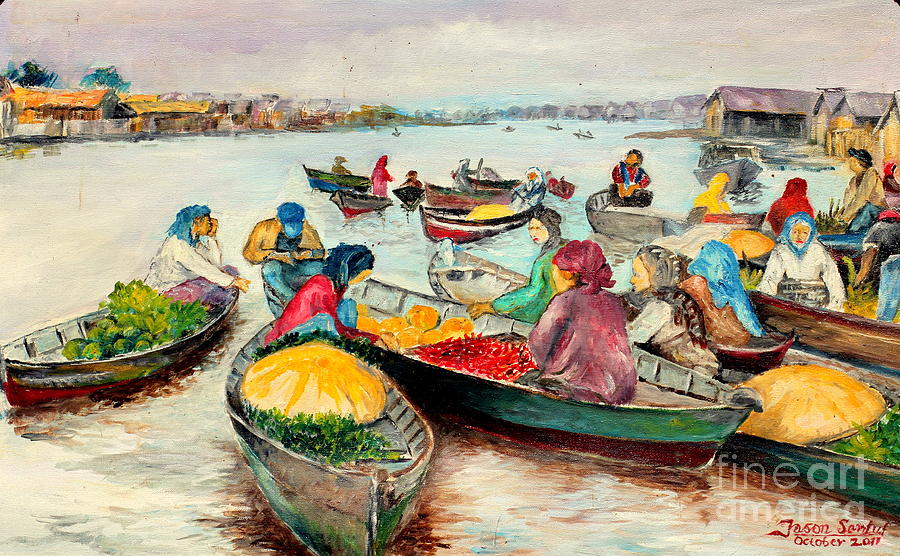 This original painting is currently for sale.   At the present time, originals are not offered for sale through the JASON SENTUF - Website secure checkout system.   Please contact the artist directly to inquire about purchasing this original.

Banjarmasin is the capital city of South Kalimantan province, officially established in 1526, Unique architectural heritage, the natural splendor of colorful floating markets have made this region a very charming riverfront getaway. Its key location near the junction of Martapura and Barito rivers made Banjarmasin a strategic trading port throughout the colonial era and earned the city its nickname of "The River City." This region is publicly known as " the land of a thousand rivers". ". In fact, the entire land of South Kalimantan marshy and flat. Many small streams flowing and empty into the Barito river. There are several reputable floating market locations found in Banjarmasin such as Lok Baintan and Muara Kuin. Both are traditional markets on Jukung (boats) that sell a variety of merchandise, such as the production of agricultural / plantation and not too long bussy market, only about three to four hours. To buy fresh fruits and vegetables, you've to left home at 04.00 AM. You have to get there before everyone arrives.
One of the fabulous characters of this river tourism market is "jukung" or "klotok". Jukung is the name of a traditional wooden boat in Banjarmasin. Klotok is a wooden boat "jukung" that has been modified with a motor engine.
The traditional way of life in South Kalimantan still relies on its waterways and riverfront lifestyle. Exploring this land through its river life is a great introduction to its dynamic culture.
This floating market has existed since the days of the Sultanate of Banjar and going on for several generations, even some sellers still use the barter system, not need the money.
The houses of native Banjar people were built along the muddy riverbank. 90 % of the population are Muslims but we live peacefully, mutually respect other faith, are friendly, and familiar.

Thank you to all administrators of the following groups who have featured this piece:

Thank you Susan! I am glad you love and fav. this piece!

Thank you Andrea for stopping by and commenting on this piece! Much appreciated!

Congratulations, your beautiful artistic work is Featured on the home page of the "Bedroom Art Gallery" group. 6/27/21 l/f/pin

Thank you so much Lyric for featured this one of my favorites painting on the home page of the "Bedroom Art Gallery Group!. You are so kind!

I like how the boats lead my eye in every direction in this vignette on the water. Like/f

Thank you so much Anne for visiting and comment on this one of my favorites oil paintings! Sorry for responding to you just now!

A marvelous painting! Colorful scene and a great composition! L/F/Pinned.

This is absolutely wonderful painting Jason! I love the subject, composition , etc

Jason...another amazing LIFE moment ...yes, those oils come alive on your brush...BEAUTIFUL!..LF What a rich talent base you have, Jason ...oils on your brush dance Life energies onto the canvas!.. The backstories are so richly infused with history, love of and respect for cultural ways...these oainted chronicles are jewels, Jason! Thank you for sharing them...someday, my wish for you is that they become a book...amazing observations.

Hello Laurel...I am really flattered by your compliment that of course reminds me of South Kalimantan. We have been there for 18 years serving as missionaries. We have been back to West Papua, my homeland since November 2015. Thanks for such a marvelous comment .. You are so kind!

Very nice painting of a water and boat scene.

Thanks Mike for stopping by and comment on this piece!

Love your art - this one especially caught my eye. I love the simple life this picture and story depict

I am really flattered by such an encouragement comment, Crowell !!! Just visited your gallery online as well and love all of your admirable artworks especially Birds of Florida look so fantastic...Good Luck

The Master Designer has certainly put His Spirit in you, so that you can capture His marvelous and handy works and share with the world. You help to let us all know and remind us that there is a creator. He made everything that we see. THANK YOU!!!

Lovely painting of the Floating Market.

Thanks for your compliment on this one of my favorite painting, Alla.. Happy Painting!

A lovely painting full of interest, life and colour! l/f

Hi Elaine... Thanks for visit!! Your comment on this one of my favorite painting is really appreciated!

One of my favourites from your gallery. Lovely! L/F

Thanks again for your comment...glad love and fav. on this one of my favorite oil painting... Happy Weekend!

Thanks Marilyn for your encouragement comment...You are so kind!

This is lovely! I very much enjoy the unique subject matter and the tranquil colors. So nice.

thank you for your coment !